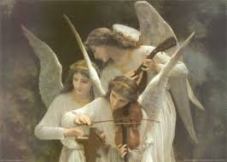 The occurences became more frequent beginning with the 1st Sunday in Advent of 2011. I truly believe now, in hindsight, that all these things, sightings, blessings, were preparing me for my mother’s death. Stepping stones that would give me a firm grasp on the sure and certain hope of the resurrection.

And there were angels.
Sunday, November 27, 2011. The First Sunday of Advent was a service of Lessons and Carols at the Episcopal church where we regularly attended. The readings were familiar and beautiful and the music was very moving.

And there were angels.

The 3rd lesson of the day was Isaiah 6:1-11, the lesson that was always read at the closing worship for every Cursillo/Via de Cristo weekend we attended:
“In the year that King Uzziah died, I saw the Lord sitting on a throne, high and lofty;and the hem of his robe filled the temple. Seraphs were in attendance above him, each had six wings: with two they covered their faces and with two they covered their feet and with two they flew. And one called to another and said:
‘Holy, holy, holy is the Lord of hosts; the whole earth is filled with his glory.'”

The lesson continued, but it was at that point in the reading that they appeared. The angels. How many? I have no idea. They filled the peak of the sanctuary (the nave) right above the altar on each side. I saw faces indistinctly and white garments and the light that shone from their faces-pure adoration. They kept appearing one by one from behind one another as if they were delighted and curious by the music and the words being spoken.
My husband was in the choir at the front of the nave and I looked at him to see if he showed any sign of seeing the vision. At that moment there appeared directly behind him a solitary angel, approximately seven feet tall and with a distinctly human appearance. Kind, loving and protective demeanor, wings folded down but visible like a shield behind him. His eyes were dark blue and filled with knowledge of the eternal-deep and wise. I knew it to be the Archangel Michael. Silently he stood as the lesson was read, my husband unaware of his presence. As the reading ended, the vision faded.

The eighth lesson: Luke 1:26-38, the Annunciation of the angel to Mary. The violinist began to play Ave Maria–and the angels returned to the nave but this time, stepping from their midst, appeared the Virgin Mary, her garment crystal blue. As she came forth I heard them whispering “Virgin Mary, the Queen of Heaven”. As the reading and the music ended, the vision faded.
Driving home in silence, alone in my car, I reflected on the events. Was I crazy? Was it from God? My confirmation came in two ways. One, in all of my religious education not once did we ever refer to Mary as the Queen of Heaven, yet I heard it clearly. I then pulled the church bulletin from my purse to look at the lessons again. On its cover, I had not noticed before, was an angel. Of course.

Fresh from my head’s hard drive…

Now are you curious?